Over the years I collected a box full of failed prints, skirts and filament pieces from empty spools. So I thought about ways to recycle it and decided to melt it into a solid plate. This post describes the process and results.

First I sorted out different materials and got more than 400g of PLA pieces. Then from multiple sheets I formed a rectangular mold and put about half of the PLA scrap into it: 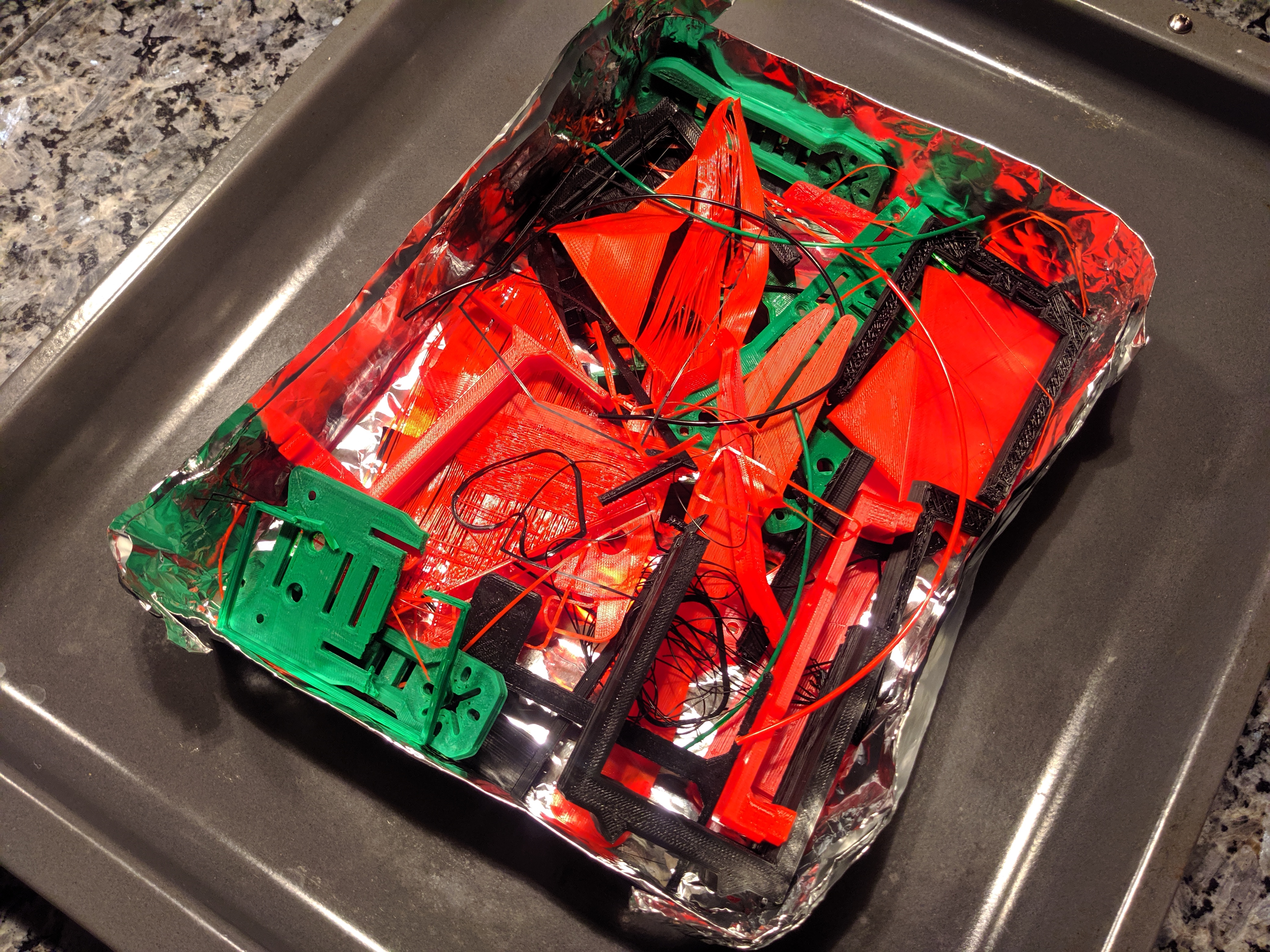 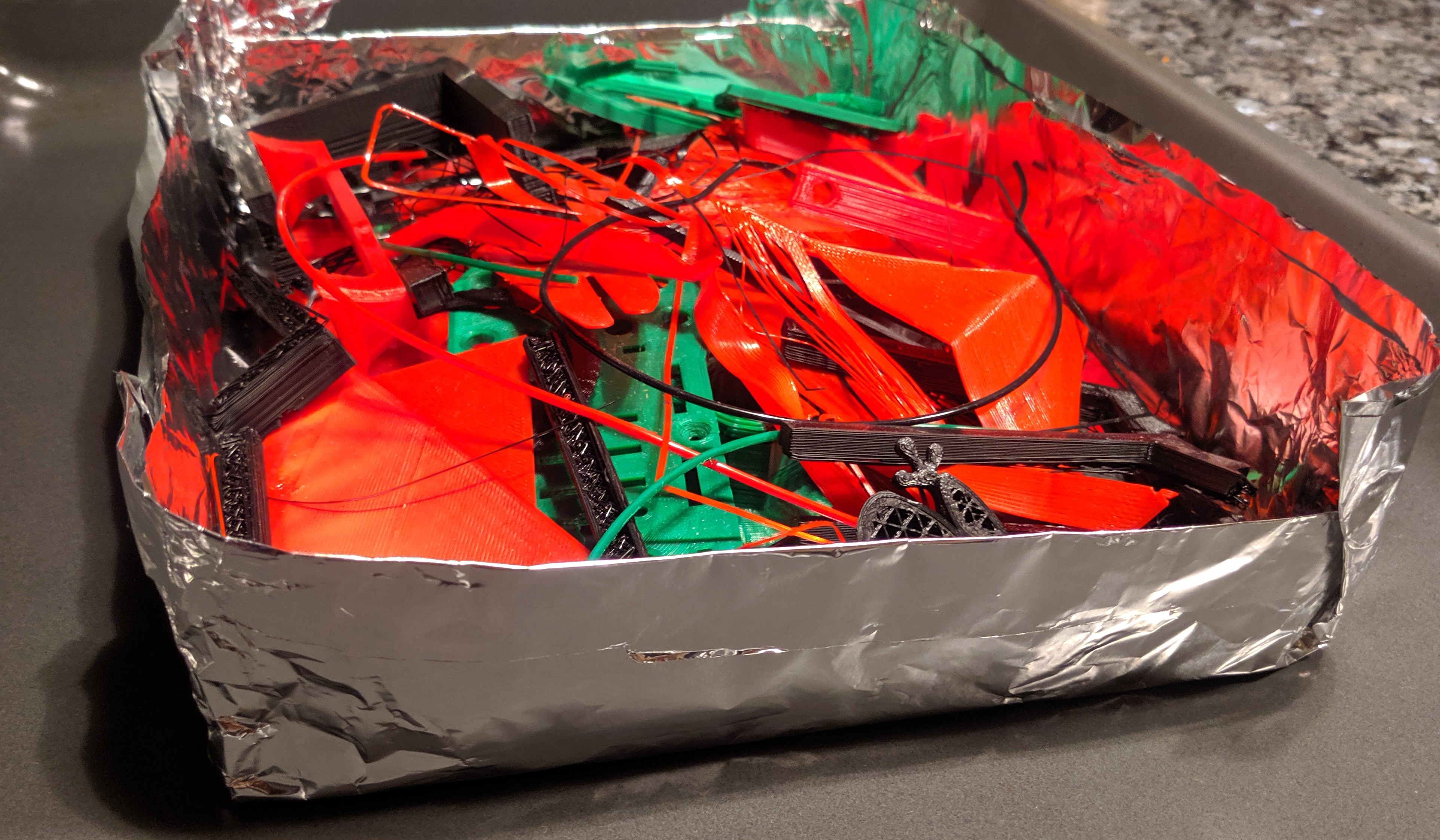 It is on a baking tray, because I used a normal oven to heat it up.

After about 10 minutes in the to 200°C preheated oven it started to get soft and more compact, so I could add add the remaining PLA scrap into the mold. After 30 minutes it already had melted quite well together: 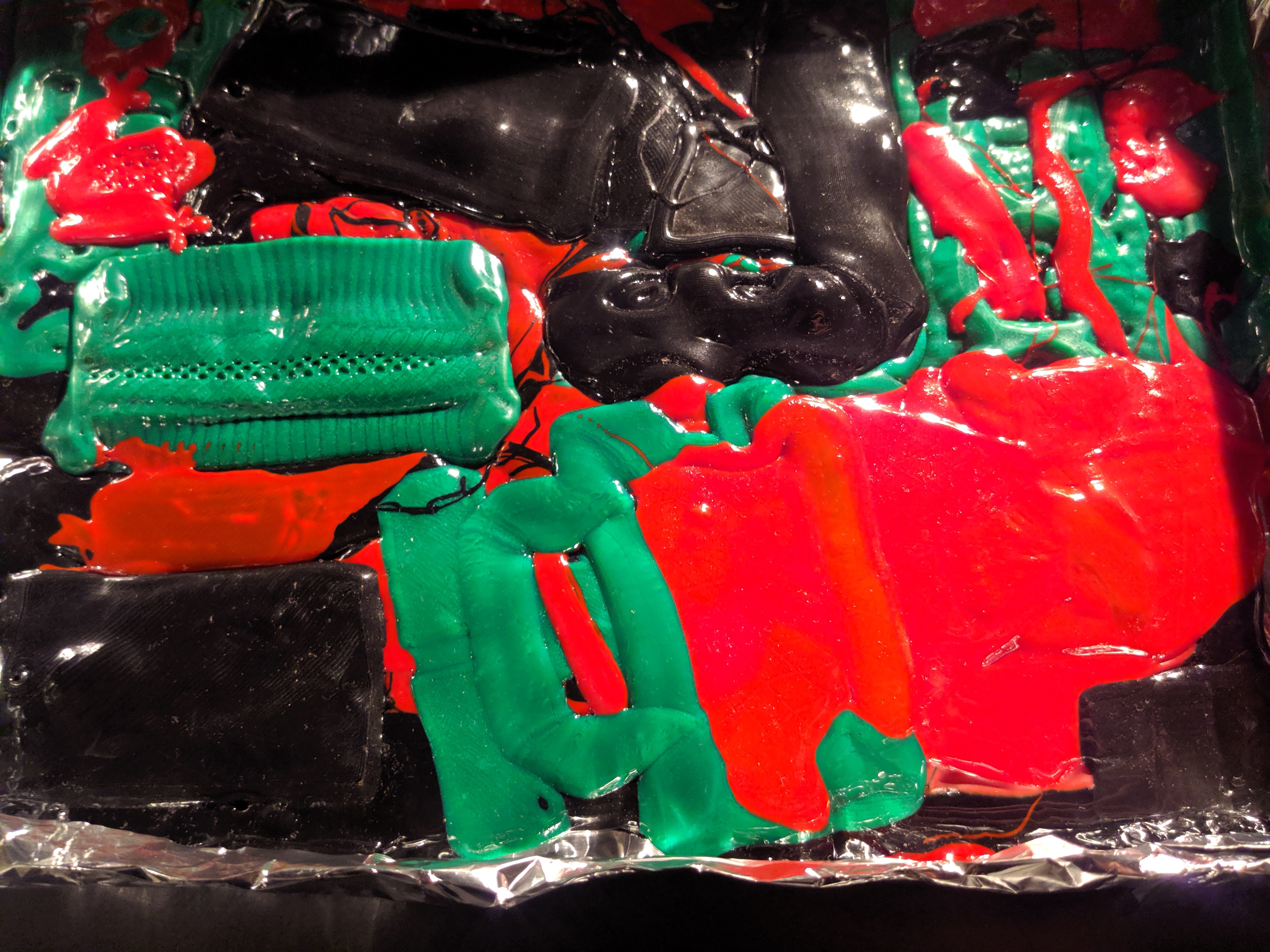 Checking with an infrared thermometer showed a surface temperature of 120-150°C, which makes the material soft, but is not enough to get it really flowing like a liquid. To fix that I set the temperature 20K higher, because other parts of the oven were also only at 180°C.

In addition it produced a noticeable smell, not burnt or anything, just like a 3D printer produces. Or rather hundred printers running simultaneously, which makes sense, because the surface area is a lot bigger than an nozzle and a printer would take ten of hours to make such a large solid piece. If you make this yourself just make sure the room has good ventilation or a window open.

After more than an hour overall baking time it finally was runny enough to flow into the edges an create a properly flat surface: 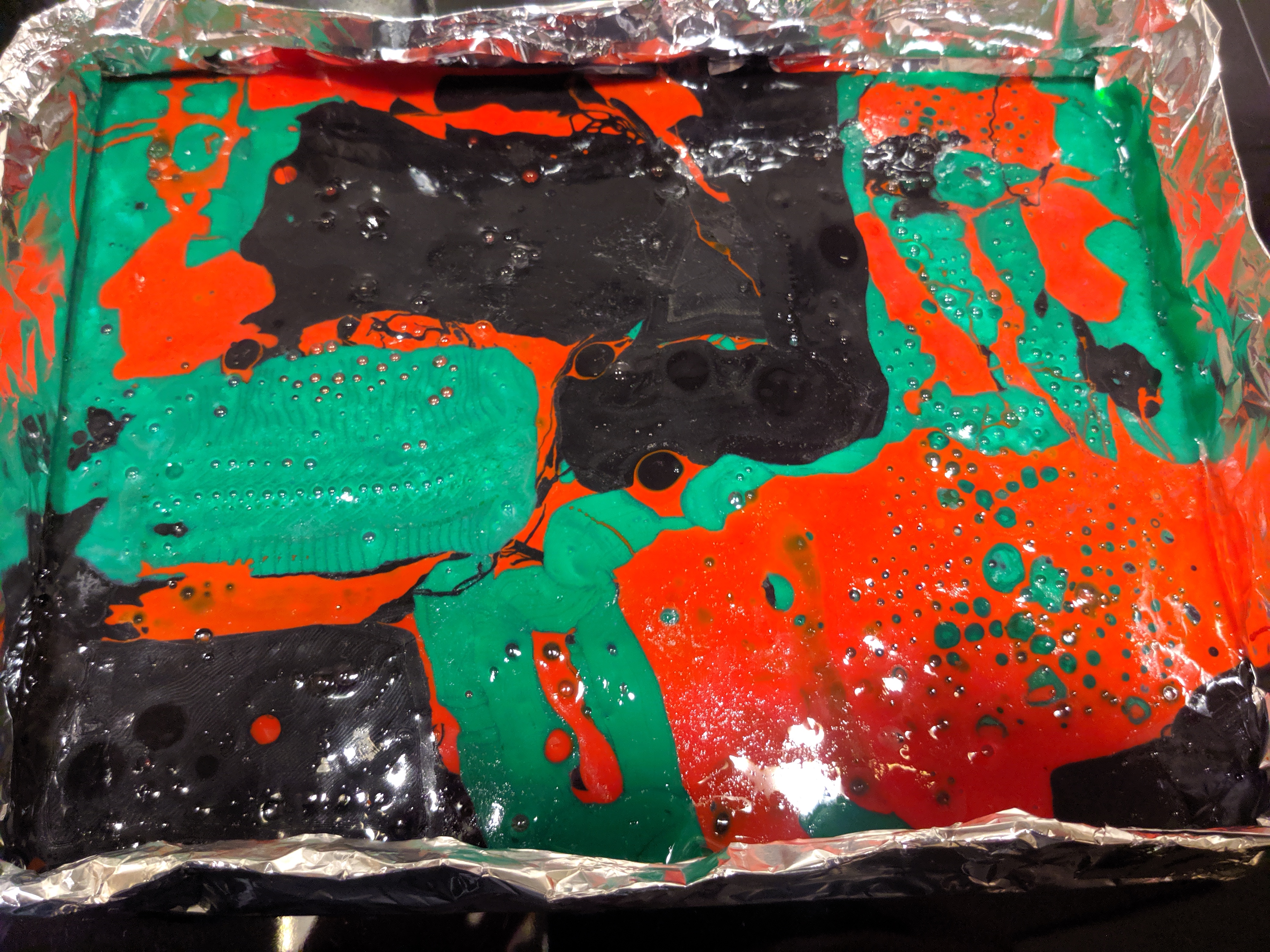 The temperature was at 205°C now, so I took it out of the oven. There were a few bubbles rising to the top, this is most likely from the parts with non solid infill, whichs contains some air. The biggest bubbles had already popped, to get it completely solid/clean it would probably need another hour in the oven. But this was good enough for me.

I let it cool off to about 40°C and tried to peel of the foil, with mixed success. Some areas were surprisingly easy, but it gets almost impossible if there is a wrinkle and no piece to pull. Some thicker aluminum would have been better I think. The remaining foils does not really hurt though and fits the random look ;) 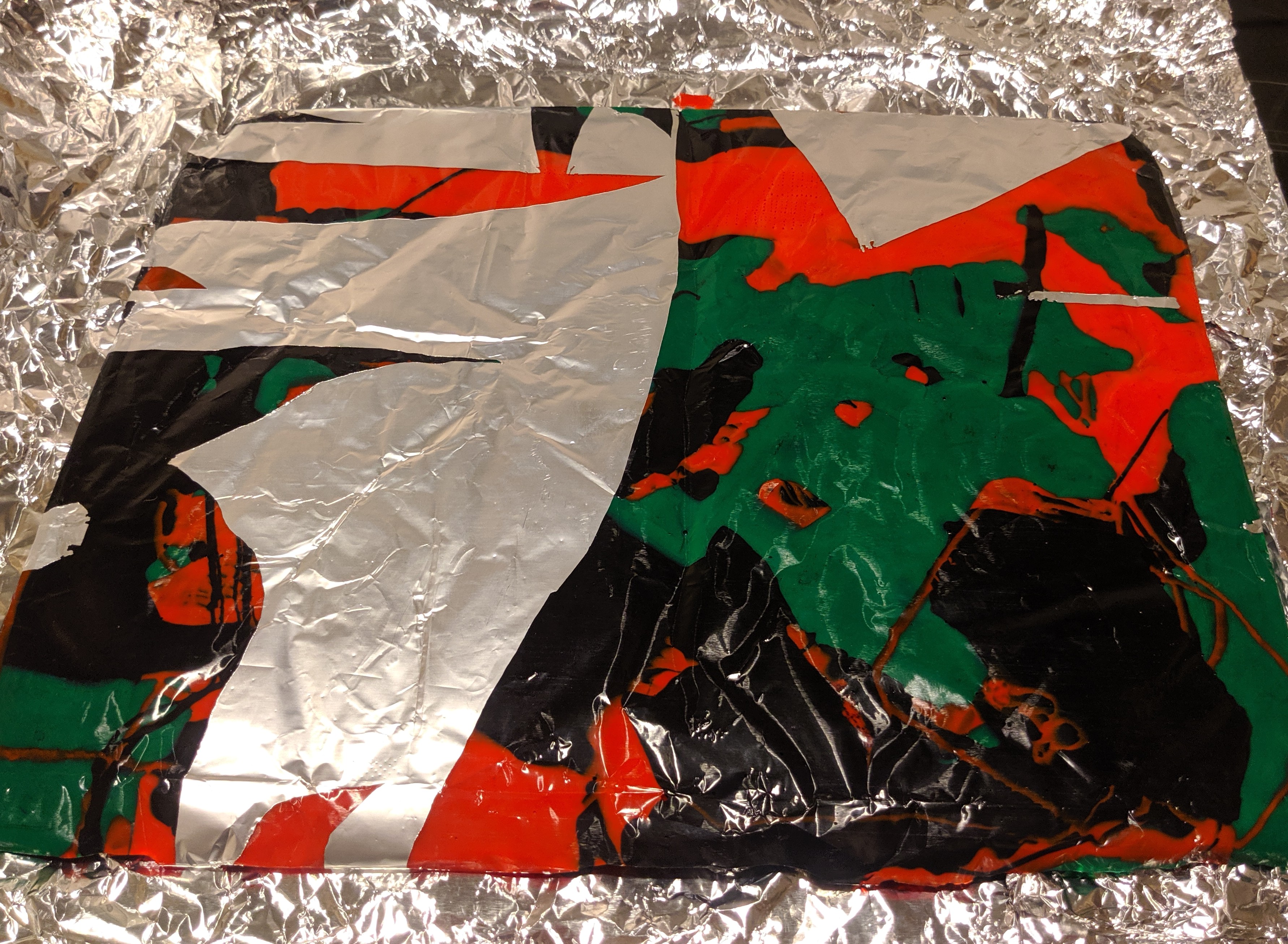 From the side you can see the thickness of about 8mm: 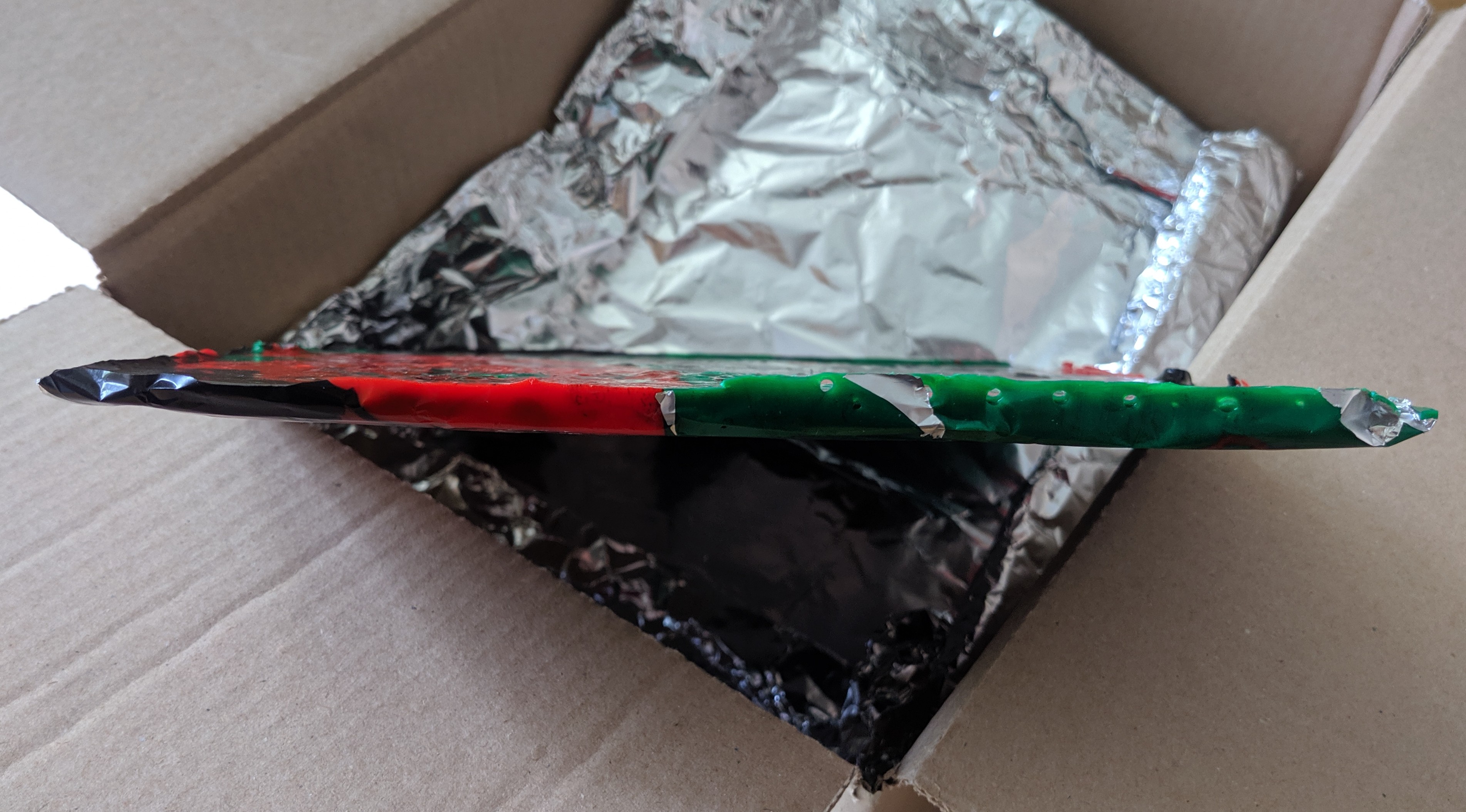 This makes is very strong, I quickly tested it with 500N (50kg) and it withstand. Overall I am happy with the result. Planning to cut the sides straight and use it as base plate for a upcoming project.

It could be also interesting for making some decoration, with molds in other shapes.